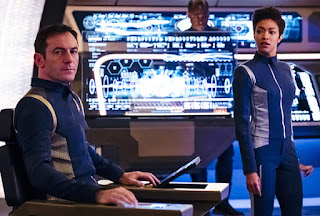 Broadcast TV continues to copy cable and streaming networks this year, copying their trends. The new shows this year include some sci-fi and fantasy, along with the usual cop shows, medical shows, law shows, and comedies. You will see many familiar faces turning up as well. FOX has "The Orville," a spoof of shows like "Star Trek," on Thursdays. It's written by and starring Seth McFarlane, who has had great success with shows like "Family Guy" and the movie "Ted." The first new show to premiere in the Fall, it has done well so far in the ratings. There is also a new "Star Trek" show on CBS called "Star Trek: Discovery." The first episode aired on CBS, and the rest is shown on their streaming service, CBS All-Access. You can view it for $7 a month or watch it commercial free for $10. CBS is hoping it will be a big hit, so that they can launch many new streaming shows and be as successful as Netflix, HULU and Amazon Prime. Video Link 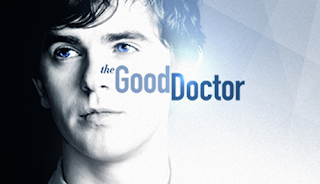 Several new shows are showcasing teens with autism and/or high intelligence. ABC has the new medical show "The Good Doctor," about a new intern at a hospital who's not only super smart but also autistic (starring Freddie Highmore of "Bates Motel"). Video Link There's already a good comedy on Netflix about an autistic teen, "Atypical." The "Big Bang Theory" spinoff "Young Sheldon" is airing on CBS. Although many fans have speculated that Sheldon is on the spectrum, there's no mention here of his being autistic, just very smart and clueless. In "Young Sheldon," we get to see how he grew up in his Texas family, narrated by the adult Sheldon (Jim Parsons). It airs on Thursdays. More about the new shows here. 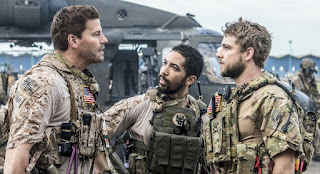 Another theme running through the new shows this year is military service. CBS has "SEAL Team" on Wednesdays, starring David Boreanaz ("Bones"). Video Link NBC has "The Brave" Mondays, about a Special Ops squad of highly trained undercover specialists (starring Anne Heche). Also on Mondays is "Valor" on The CW, a serialized military drama/thriller starring Matt Barr. Not many military-themed series have survived for very long on TV, aside from NCIS and its spinoffs. Trump's presidency, and the working-class male audience that voted for him, may be the reason for these shows. 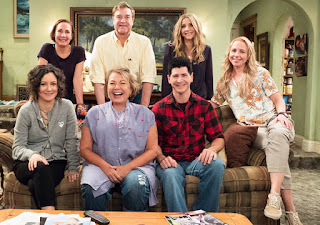 Also, there are quite a few reboots and familiar faces. "Dynasty" on The CW attempts to remake the successful 1980's ABC Primetime soap opera. "Will & Grace" reunites the original cast of the NBC sitcom that ran 1998-2006. "S.W.A.T." starring Shemar Moore ("Criminal Minds") is a reboot of a 70's cop show that also spawned a 2003 film. “Roseanne” will be returning soon on ABC with the same cast.  Video Link TV veteran John Larroquette was one of the stars of "Me, Myself & I," while Mark Feuerstein ("Royal Pains") stars with two 70's actors Elliot Gould and Linda Lavin in "9JKL" on CBS.  If the reboots are successful, then you can expect more of them. Using familiar actors and rebooting popular shows is something that networks love to do. 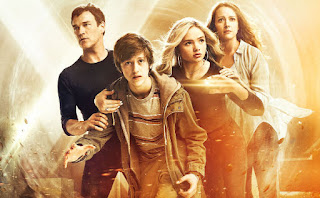 There are a few innovative shows on broadcast TV this year. ABC's "Kevin (Probably) Saves the World" has a strange title, but it’s a fun, heartwarming show. Video Link A lovable loser gets help from an angel to fulfill his destiny. FOX has a new Marvel show, "The Gifted," about a family whose children are mutants. It’s really excellent.  The show's creator also did the wonderful spy drama, "Burn Notice," on USA Network. “The Gifted” stars Stephen Moyer ("True Blood") and Amy Acker ("Person of Interest"). 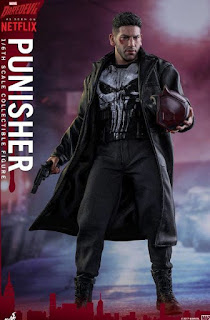 Streaming and cable shows continue to be dark and depressing (but mostly well-written). “Damnation” is a type of western drama on USA Network, set in the 1930’s, in a battle between rich and poor.  “Ghost Wars” on Syfy is about a small Alaskan town under attack by paranormal forces. Another Syfy show, “Happy” is about a former cop, turned hitman, who sees a little blue flying unicorn. Video Link “The Punisher” is another violent Marvel comics series on Netflix about a vigilante that kills criminals (formerly seen as the villain in “Daredevil,” season 2.). “Alias Grace” is a murder mystery set in the 1800’s about a cleaning woman who may or may not have murdered her employers. “The End of the F***ing World” has two teenagers in pain, who get into trouble with the law.  These shows are interesting, but they’re very dark and sometimes hard to watch. This trend has been going on for quite a while now, sadly, and it's gotten much worse in the past decade. 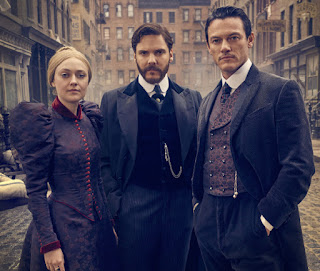 Continuing this dark trend, serial killers are still very popular. Besides the serial killer shows we already had, like “Criminal Minds” and “Mr. Mercedes” on DirecTV, we can add the new shows “Mindhunter” on Netflix, and “The Alienist” on TNT.  These are very good, compelling shows, if you don’t mind serial killer stories (which can be very gruesome). Video Link

TV always has trends. There used to be a lot of westerns in the early days of TV. Then there were many variety shows.  Later, we saw lots of shows about vampires.  Trends come and go. As a TV fan, it's always interesting to see what the latest trend is. Here's a peek at last year's programming trends.  Usually the trend starts with one very successful TV show, and then everyone else rushes to copy it. It works...until the next trend comes along to replace it.Video Link
Posted by Suzanne Lanoue at 9:44 PM