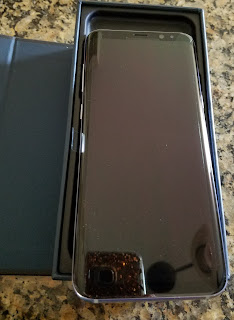 My new phone is the Samsung Galaxy 8 Plus, on which I did my Media Presentation last year in Trends in Modern Media (You can also see it here). I wanted it badly since last spring because it has lots of neat features, and the screen is much larger than the Galaxy 7 (the one I had before).  Also, I just love getting new toys! 😁 I finally bought one in late November, for my birthday.

I'm at home most of the time, so I largely use my phone for texting, making phone calls, checking the time, using Snapchat, taking photos, taking videos, and posting on Instagram. (Things I can't do on my laptop)  If I'm away from home, I also use it for checking messages on Facebook, Twitter and email, and for Web browsing. Once in a great while, I'll use the alarm, calculator or flashlight apps. If we're traveling, I sometimes use the Find Me GF app or the Lyft app.

Having the big screen makes it ideal for watching videos. It has really good sound, too. Personally, I prefer to watch most TV shows or movies on my TV. However, if I'm on Facebook and someone posts a YouTube video or some movie trailer, it's great to watch it on my

I've also used it to record my singing when out at karaoke. I use the app HiQ, which is a good app for recording. The sound quality is pretty good, especially for a phone, and especially for live music in a crowded bar. I might also use it for my voice lessons. The teacher encourages us to record our lessons. I just keep forgetting to do that.

Another great thing about the sound quality is that you can turn the volume up really high for phone calls (either the volume in the call, or the volume of the ringer).  It can get really loud, which is nice to have if you're in a loud place and it's hard to hear.

I haven't installed any of the apps for streaming videos, other than YouTube, which comes with it. I'm sure I could use it to watch Netflix, Amazon Prime, Hulu et al. I have subscriptions to all of the major streaming services, but I doubt I would ever use them on my phone. I can't even think of a situation where that might happen. The screen is still just too small for me to enjoy any TV show or movie. I wanted the big screen so that I can see the text and photos better because, well, I'm in my 50's! It's great that I can adjust the settings on the phone to make the text and everything larger, just like on my laptop. 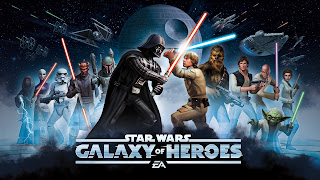 It's also very good for streaming games. I'm not a gamer, so I don't usually play any games. My phone comes with this Star Wars Heroes game, so I tried it out. It's pretty cool. The visuals and sounds are amazing.  Video games have certainly come a long way in the last 30 years. 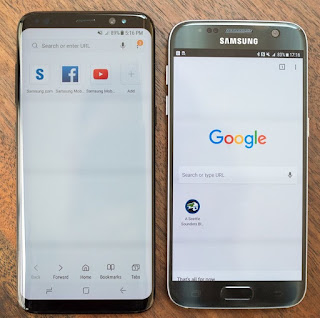 I paid less than $400 for the phone, since I was upgrading from the previous version. That one (the Galaxy 7) cost more than twice as much, so it was nice to get a price break.  I bought the phone from the Samsung website because it was slightly cheaper there than buying it via Verizon (my wireless provider).

Both the Galaxy 7 and Galaxy 8 are very slim. The Galaxy 8 is even slimmer and has no bevel
(which is a new thing with cell phones to create more space for videos and apps). Samsung calls this their Infinity. It has virtual home and backspace buttons rather than built-in ones. It took some getting used to. Sometimes those virtual buttons get in the way of the phone or texting virtual buttons, which can be frustrating. 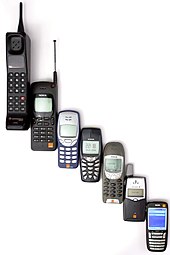 A little history: When mobile phones first came out, they were huge. I don't think I saw one until the 80's when my mother-in-law got a "car phone."  They got gradually smaller (too small for some of us older folks), but then once smart phones came out, and then WiFi and streaming videos,  the screen size and phone size were increased. This was just a few years ago!

Although the phones are slimmer, and relatively lightweight, if you buy a protective case, that makes it much heavier.  It's really too heavy to carry it in my pocket (if I even had a pocket that large!) or purse. I wish someone would find a way for you to have a lightweight, foldable phone, tablet or laptop that you could fit into your pocket, and then you could unfold it into a large 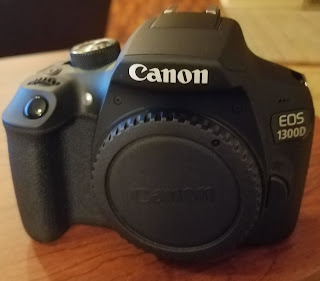 screen. That would be so convenient. I know they've been working on this for years, but I guess it's not quite ready for the public yet.

When I walk the dog, I leave my phone at home because it's too heavy. Invariably, I see something cool or photogenic that I wish I had a camera for.  It's much more lightweight than a good digital camera, like real photographers use, but it's not quite as lightweight as the smaller point-and-shoot cameras....unless you take the protective cover off -- but then you risk dropping it and breaking it!

Posted by Suzanne Lanoue at 5:53 PM